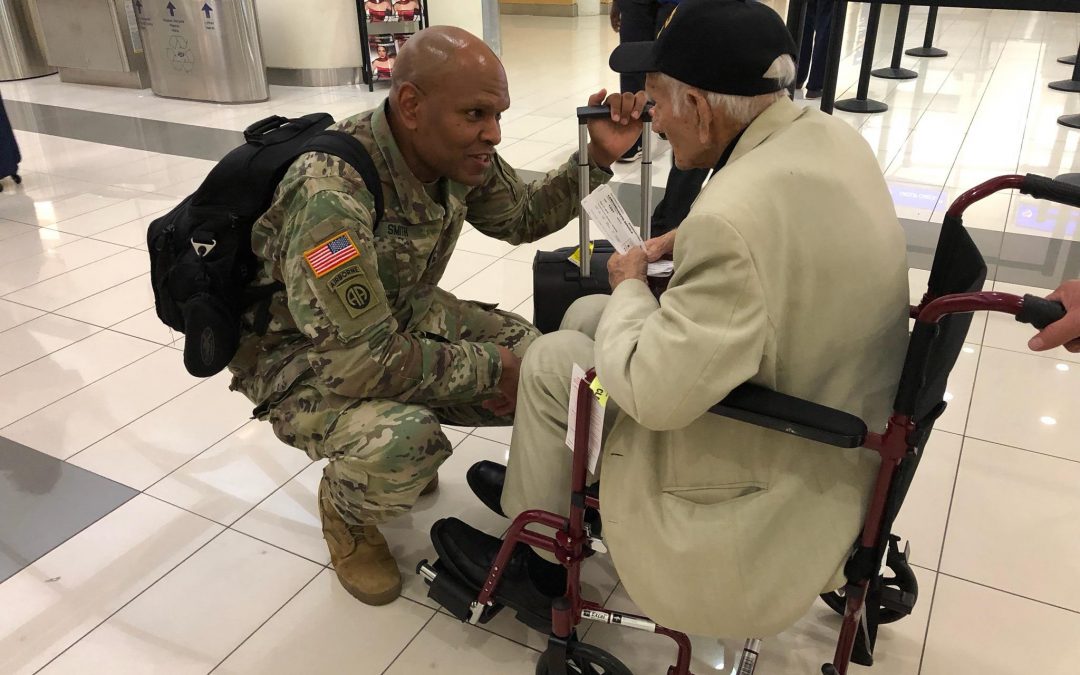 100 Year Old WWII Veteran From Tullahoma Travelled on this Flight

Coffee County, Tenn. — The Honor Flight of Middle Tennessee made its fall 2019 flight to  Washington D.C. on Tuesday Sept. 17th

World War II, Korean War and Vietnam veterans were on this trip.
David Lowhorn, a 100 year young, World War II Navy veteran from Tullahoma was also on this flight, along with a female Navy Korean War veteran Betty Jo Cyr.  Veterans on this flight had served in the Army, Army Air Corps, Navy, Marine Corps and the Air Force.
Veterans arrived at the Nashville airport around 5 a.m. and left on a Southwest Airlines flight at  7:15 a.m.  The veterans and their guardians returned to Nashville on a Southwest flight around 8:55 p.m. on Sept. 17th.
While in Washington the veterans visited the World War II Memorial.  While at the World War II Memorial the five World war II veterans on this flight participated and were honored during a ceremony commemorating Operation Market Garden that occurred 75 years before.
The veterans also visited the  Korean and Vietnam Memorials.  They saw the Marine Corps Iwo Jima Memorial, the Air Force Memorial and the Pentagon.
They also watched the changing of the Guard at Arlington National Cemetery at the Tomb of the Unknown Soldier.
After a full day of visiting War Memorials  the Post Commander at Ft. Myer and her staff hosted them for dinner.
At Fort Myer members of the Army’s Old Guard Fife and Drum Corps in Revolutionary War uniforms greeted the veterans and performed for them.
The Honor Flight of Middle Tennessee is part of a national network of Honor Flights that takes World War II, Korean War and other veterans to Washington D.C. at no cost to the veterans to see their war memorials.
The Honor flight of Middle Tennessee, established in 2008 has flown almost 700 veterans to date.  The organization is a 501c3 Tennessee non-profit corporation.
Photos:
Group Photo in front of the Tennessee Column (photo by Paul McCullough)
Children greeting group as they arrive at the World War II Memorial (photo by Claude Morse)
Cong. John Rose speaks with World War II Marine Corps veteran LeGrand Dawes, Jr. (photo by Claude Morse) 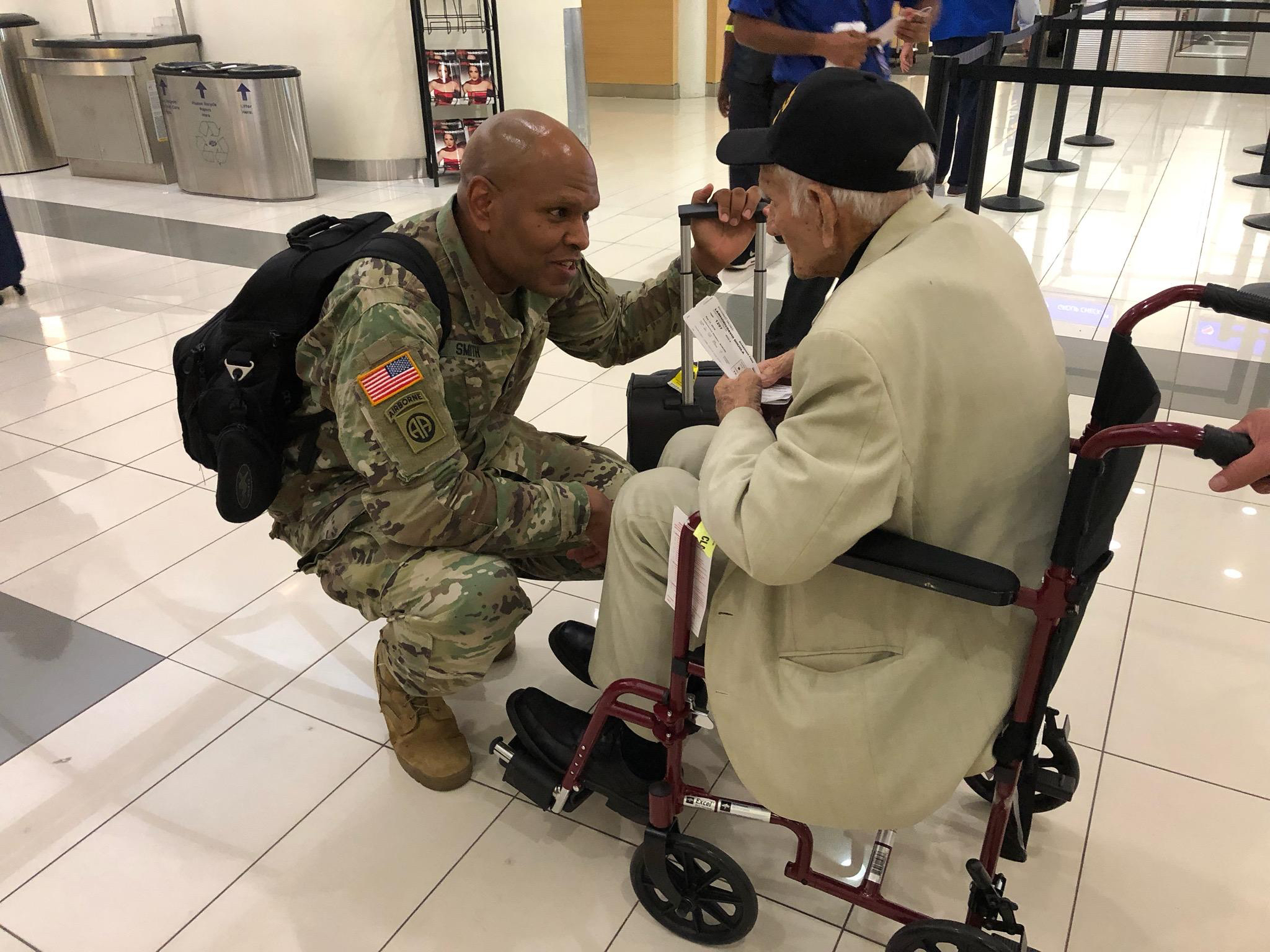 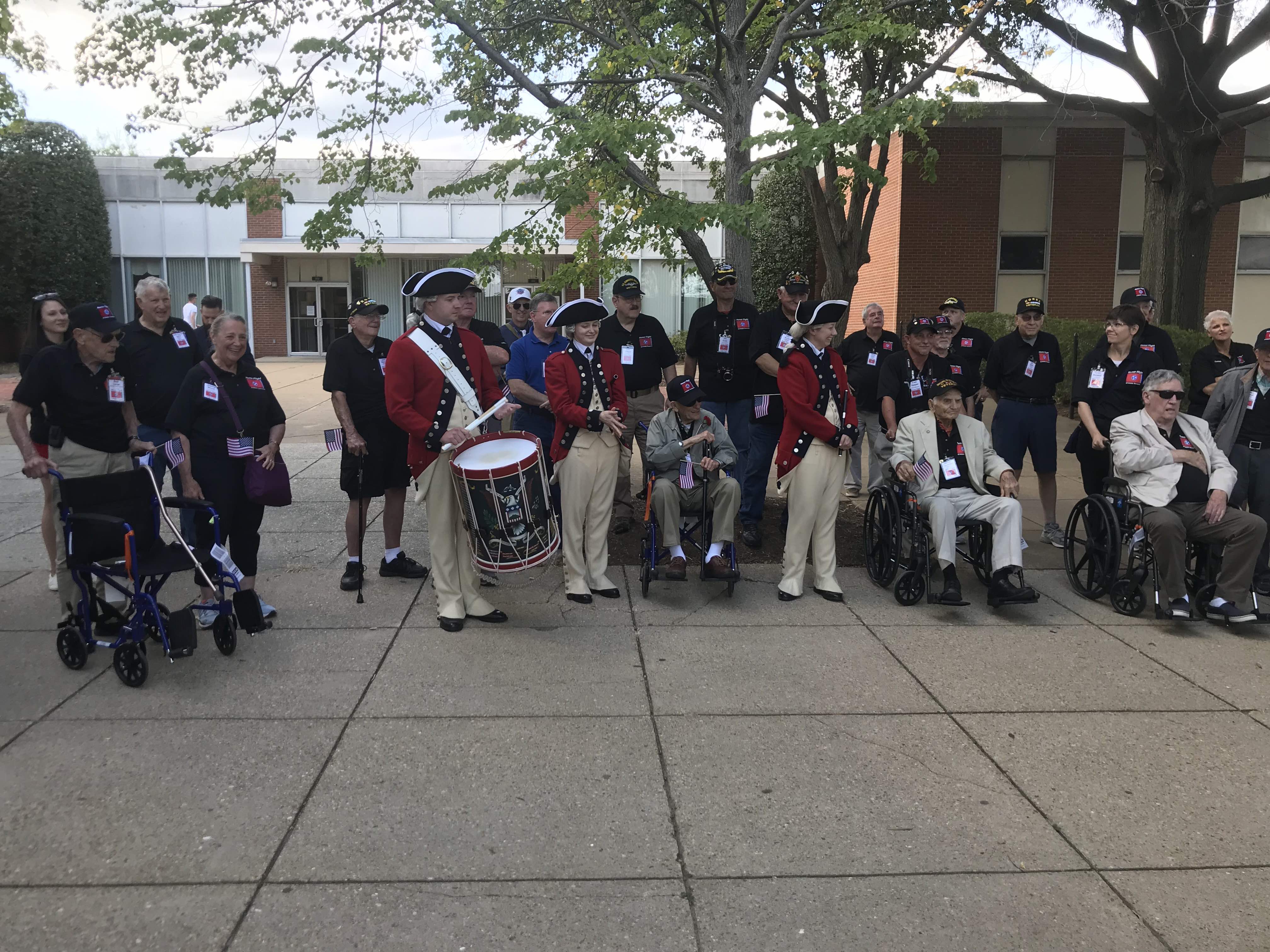 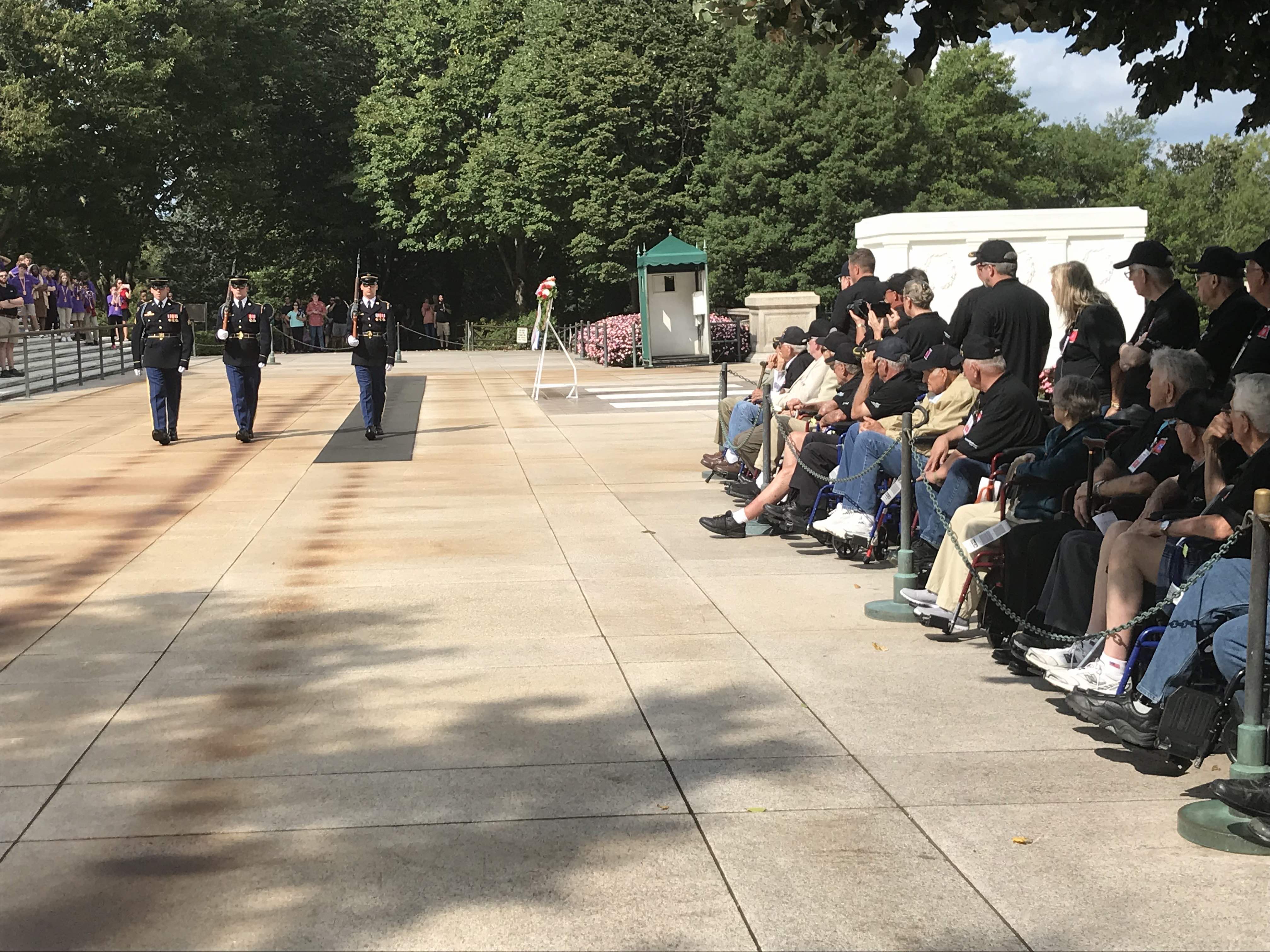 Honor Flight of Middle Tennessee Military veterans observe the  changing of the Guard at the Tomb of the Unknown Soldier at Arlington National Cemetery on Sept. 17th.  (Photo by Claude Morse) 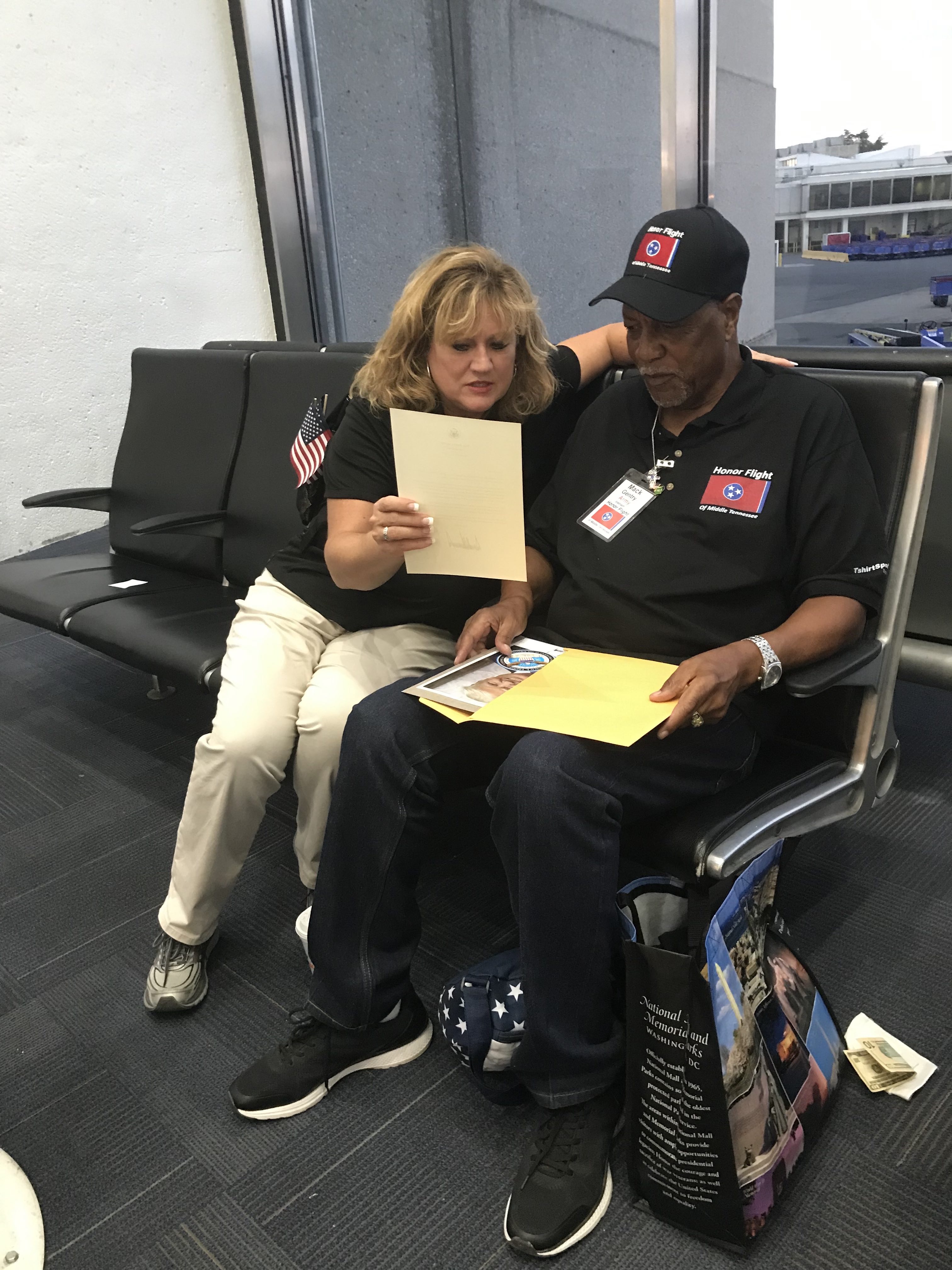 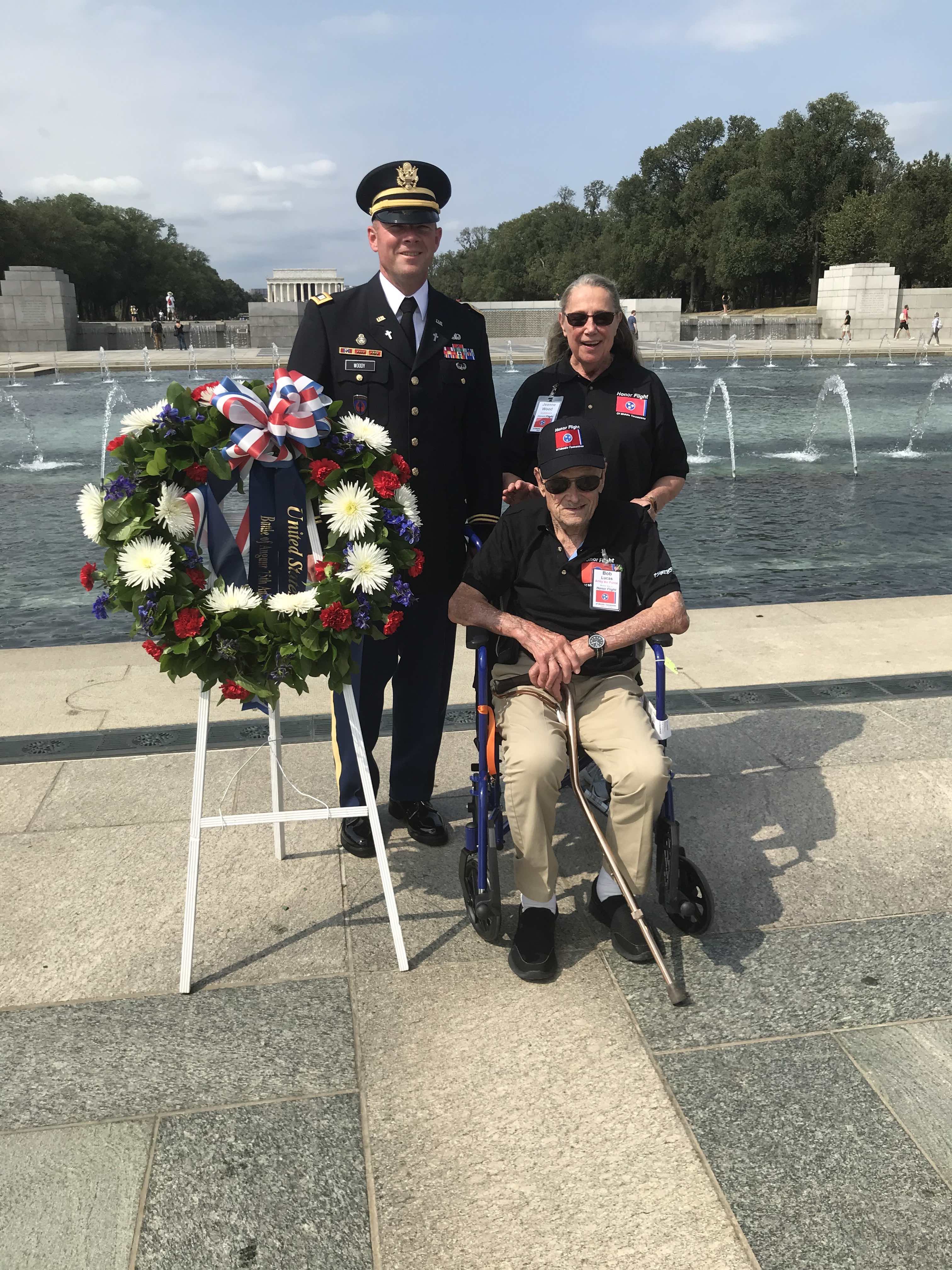 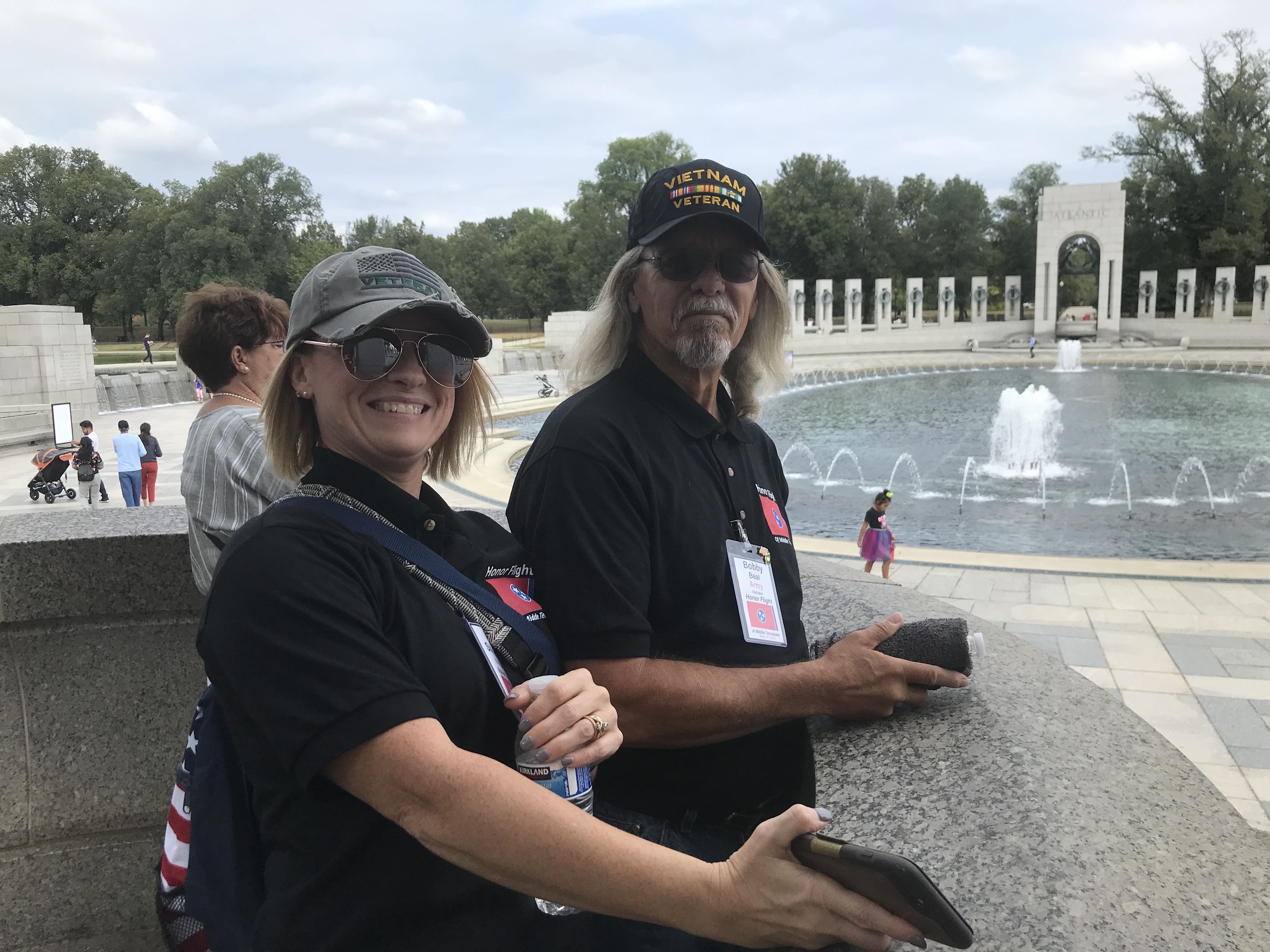